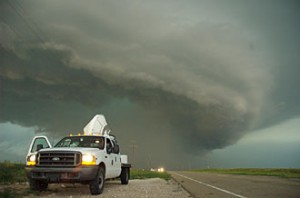 Tornado chasers in the US park southeast of the tornado. It’s usually the safest spot to film or record. The reason is because tornadoes normally travel from southwest to the northeast.

Tornado chasers may drive hundreds of miles during a single chase.

Most Tornadoes form in the afternoon. Tornado chasers start planning in the early morning.

Tornadoes aren’t the only danger, Tornado chasers have to be careful of the lightning coming from the thunderstorms that produces tornadoes.

In 1983, lightning struck right next to five tornado chasers. Luckily they all lived.

Hail is a common concern for tornado chasers.